CRISPR is a genetic editing technology, one of the most promising in recent years, and its role is only going to increase in the nearest future. Thus, according to a Polaris Market Research prediction, the CRISPR market will reach $4.75 billion by 2027. The authors of the study predict a growth of 16.7% over the next 7 years.

The technology allows modifying plant and animal genomes, which finds application in the design of new drugs, plant genome editing and other fields of biotechnology.  However, not everyone clearly understands how gene editing works.

CRISPR/Cas9 is an advanced tool for genome editing. It was developed relying on a set of proteins found in bacteria. Biologists were able to adapt certain elements of their immune system to edit the genomes of bacteria, plants and animals. This use of CRISPR was a real breakthrough. It was awarded the Nobel Prize in Physiology or Medicine in 2012 (Charpentier and Jennifer Doudny of the University of Berkeley). Unlike its predecessors (TALEN and Zinc Finger nucleases), CRISPR/Cas9 is much cheaper, more accurate, faster and easier to work with. This technology can significantly speed up DNA editing, allowing several genes to be modified simultaneously.

Timeline of CRISPR. How do bacteria use CRISPR/Cas9 to fight viruses?

CRISPR was shown to play a role in bacterial immunity

Cas9 was used in combination with genome-wide association study, i.e. GWAS, for the determination of gene function. This has tremendous practical significance. Later this technology was used to search for genes responsible for tumor resistance to chemotherapy.

Sherlock Bioscience receives an emergency use authorization (temporary approval) from the FDA for its CRISPR-based Covid diagnostic kit.

The CRISPR/Cas system was first discovered in bacterial DNA in 1987. Bacteria use this system to protect against viruses, and they do so for a reason. Unlike human cells, which largely rely on the immune system to protect them from viruses, bacteria have to do everything by themselves.

The CRISPR/Cas9 system allows bacteria to distinguish between their own DNA and the DNA of viruses attacking them (so-called bacteriophages), and to neutralize viral DNA. If a bacterium gets attacked by a virus but manages to survive, a significant step follows it. The virus DNA is cut by Cas-proteins and embedded in a specific region of bacterial DNA, called the CRISPR-cassette. As a result, this cassette contains a large number of alien DNA fragments. Thus, the bacterium "memorizes" them.  Each time a new virus attacks the bacterium, the Cas-protein compares its DNA with the fragments already contained in the bacterium "knowledge base" – the CRISPR-cassette. If they match, the Cas-protein cuts apart the viral DNA. 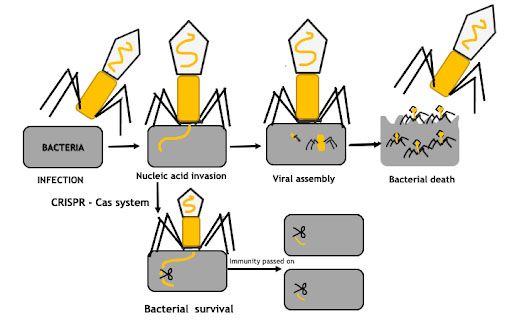 Figure 1: How bacteria use CRISPR/Cas to fight viruses.

In 2011, Jennifer Doudna and Emmanuel Charpentier proposed the use of CRISPR for DNA editing. It was the precision of the cut made by Cas proteins, as well as the ease of controlling the site of the cut that attracted their attention.

As turned out, it is enough to introduce DNA in a specific area of the bacterial genome, CRISPR-cassette, and Cas-protein will start to cut the DNA in the selected place. Moreover, while the systems known by the moment were difficult to use and contained multiple proteins, the CRISPR system proved different. The novel gene editing system managed all work with only one protein. 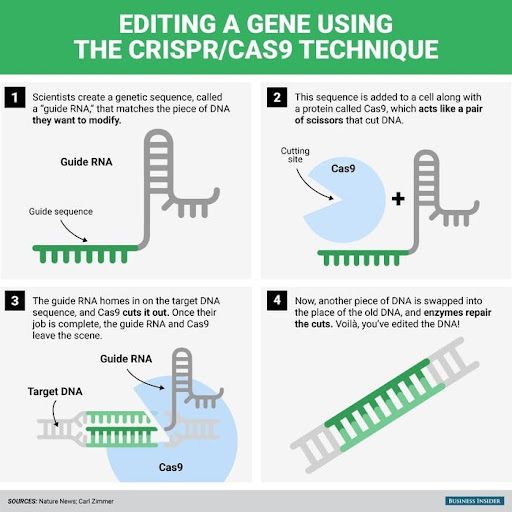 CRISPR in discovery and prioritization of novel targets for pharmacology

Genome sequencing, e.g reading the genome sequence, is getting faster and cheaper every year. Due to it, a genome-wide association study (GWAS) was developed in 2002 to analyze large groups of genomes. Unfortunately, this method has not fully lived up to expectations. Data generated by this method were insufficient to come to unambiguous conclusions.

In 2014, CRISPR was first suggested for the search for new drug targets combined with a genome-wide association study (GWAS). This new method includes two stages. First, candidate genes are found using GWAS. Then CRISPR is used to test biological effects of those genes by selectively turning them off. This technology can significantly speed up drug development by reducing the cost of target search and prioritization in pharmacology.

Even before CRISPR/Cas9, a number of methods were developed for turning off genes, e.x. sgRNA libraries. And one of the advantages of CRISPR/Cas9 is the ease of creating sgRNA libraries for large-scale genetic screenings (full genome screening).

Genomic screenings are significant since they help to discover a lot of new genes that are associated with certain biological functions in the cell. Usually two approaches are used: gain-of-function ("turning on" gene expression by the cDNA library) and loss-of-function ("turning off" genes through RNA interference). If a change in the activity of a gene affects the biological process under study, such a candidate gene is then researched in more detail by additional molecular genetic methods. Before CRISPR/Cas9-based methods entered the arsenal of biologists, genomic screenings were mainly performed using RNA interference (RNAi) (Boutros and Ahringer, 2008). Unlike RNAi, CRISPR is less toxic and more reliable.

The modification of CRISPR/Cas9, called CRISPR/Cas9-based ribonucleoprotein complex, allows regulating the activity of genes, chosen by the researcher, without affecting the DNA. This method is less invasive and therefore particularly promising in drug development.

A new and high-potential field in biology is the study of epigenetic changes, which is chemical modification of DNA that does not affect genetic sequence. Epigenetic changes in DNA, such as DNA methylation and acetylation, play an important role in a variety of diseases and even aging. Such changes can turn off genes and affect biochemistry of the cell.

What is especially important, CRISPR/Cas9 modification allows for epigenetic changes to be made in any region of the DNA. This can be particularly useful in pharmacology.

Since the results of CRISPR applications were accumulating in the scientific community, the buzz about it grew louder, and in 2015 the journal Science declared CRISPR the breakthrough of the year.

Nevertheless, the clinical successes have come only recently. The first patients were cured of sickle cell anemia and beta-thalassemia in 2018. However, in both cases the cells were edited in vitro. It means that blood stem cells were taken from the patients, treated using the CRISPR/Cas9 system, multiplied and injected back into the body, thus, there is no reason to hope for a long-term effect of the treatment.

Scientists report that the first clinical trials using CRISPR/Cas therapy have begun in the United States to treat congenital blindness (Leber type 10 amaurosis). According to the press release, this is the first case of human genome editing in vivo.

Another promising direction is the use of CRISPR in rapid diagnostic systems: Mammoth Biosciences and Cepheid, Inc. partnered with Sherlock Biosciences have developed SARS-CoV-2 detectors. This Sherlock™ CRISPR SARS-CoV-2 kit has received emergency use authorization from the FDA.

Inari Agriculture, an international company, uses CRISPR to rapidly develop new seed varieties with targeted traits: drought- and pest-resistance, and efficient use of fertilizer. The company has raised $145 million in funding.

Synthetic Genomics has partnered with Exxon Mobil to use CRISPR for finding more efficient ways to produce biofuels. The company targets microscopic algae already previously used in biofuel production. According to the company, they succeeded to increase lipid/kg of biomass production by 200% without slowing down algae growth.

CRISPR inspires scientists and clinicians as it opens up new possibilities for research and innovation. On another note, some questions raise particular controversy, e. g. embryo genome editing. Thus, the scientific community is concerned that public attitudes to fetal genome editing could jeopardize even somatic (i.e., nonreproductive) genome editing, as well as embryo research in general.

Here CRISPR is placed in the context of public perception of new technologies, thus, there are certain guiding principles to address. At this, a growing number of bioethicists and religious leaders admit that, under certain conditions, genetic modification of human embryos, let alone animals and plants, can be ethically justified.

In the intense debate sparked by the first genetically modified babies in China within He Jiankui's work, leading scientists and bioethicists have identified guiding principles to consider using CRISPR:

1) Lack of alternatives, such as medical drugs, preimplantation diagnosis of embryos – genetic modification of severe incurable diseases is most readily accepted by society. The genetic modification to prevent HIV, performed by He, did not meet this criterion, since there are other ways to prevent the fetus from contracting HIV.

2) Safety – there must be high confidence in the procedures used, proof of their safety.

3) Intent – the technology should only be used for purposes that benefit society, such as the treatment of complex chronic and genetic diseases.

One of the main controversies about CRISPR technology arises from its potential use in human embryos. What is crucial, it mainly concerns not CRISPR itself, but the lack of clarity about the status of a human embryo.

In addition, social and ethical issues surrounding the use of CRISPR/Cas9 technology deserve public attention. The world's first genetically engineered CRISPR twins, born in China, have caused an ethical scandal, and it remains controversial whether human genomes can be altered in embryos or even somatic cells. Even more problems will arise if a child is born using genetic engineering with CRISPR/Cas9. For example, side effects that have not yet been comprehensively studied may radically alter human genomes from generation to generation and might even lead to catastrophic consequences.

Such issues as child mental health, social behavior, or human traits (intelligence, appearance, and character traits) are also problematic. Even more troubling is the fact that commercial companies may overuse or abuse these technologies, which could lead to deeper and broader social problems. In the future, the development of CRISPR/Cas9 technology must be strictly and orderly controlled to minimize the corresponding problems.

Polaris Market Research, an international analytical agency, predicts that the main growth drivers of the CRISPR market will be the following: biomedicine, disease modeling, functional genomics, genetic engineering and agriculture.

Currently, the application of CRISPR/Cas9 in regenerative medicine, cancer therapy, obesity, malaria, HIV, and insect-borne diseases are being fundamentally researched.

The CRISPR industry offers wide and attractive prospects, but not everyone can take advantage of them. The entry threshold is remarkably high today.

The Create U future company offers its expertise in biotechnology, reproductive technology, and gene editing, including CRISPR, and also supports high-tech start-ups in entering the international market.