In quest for disruptive ideas in the field of life extension, biotechnological enterprise “Renewal Bio”, whose headquarters are located in Israel, shared an intention to use this technology to achieve breakthrough in bioprinting.

To avoid any ethical confusion the company's team is going to use genetic modification in such a way that there will be no possibility for the resulting embryo to develop a head.

Their researchers created mouse embryos using stem cells and successfully developed them to the eighth day of development - at this stage they have a body plan, symmetry and the heart starts to contract. The embryos lived all this time outside the uterus, which was first replaced by a static vessel and then by computer controlled device. The researchers intend to test this method on humans and, if it works, the artificial embryo may become a source of organs, various tissues and cells for transplantation.

All started in the University lab

Scientists from Jacob Hanna’s team in Weizmann Institute of Science wanted to develop a new way of bioprinting free from ethical and technological limitations of previous technologies. Jacob Hanna hypothesized that embryos may become bioprinters of the future, a source of different tissues and cells for future transplantation. The previous approaches are capable of printing simple tissues including bone and cartilage, however more complicated tissue types and organs are still an obstacle. Novel technology will hopefully make it much easier, because embryos are capable of producing all tissue types, all organs by themselves.

In the spring of 2021, their team reported success reported on their experience using an "artificial uterus" to grow mouse embryos. The scientists, however, did not try to recreate the uterus itself as a structure, they were only interested in whether the conditions in which embryos develop could be reproduced. So instead of a womb, they first used a plate with compartments filled with liquid, and then tubes with liquid in a rotating drum.

It was not the first experience in history with growing embryos outside the mother, but it turned out to be the most successful - mouse embryos grew to 11 days old and they began to form internal organs and limbs. However, their development was not fully autonomous: the first six days the embryos were spent in the mother's body, and only then they were removed from the uterus and transferred to ex utero culture.

Turning the wild idea into a reality forced scientists to overcome several problems. The first one was ethical. Scientists needed to ensure that the embryo will not be considered even a potential human. To achieve this they decided to find a way to stop the development of the embryo's head utilizing genetic manipulation.

The second one was immunological. How to make sure that embryos will produce tissues that will not cause immunological conflict? To achieve this they decided to use induced stem cells.

The third one was technical. How to get stem cells to form viable embryos and ensure its healthy development?

Since they didn't want to use eggs, they only had embryonic stem cells at hand, a culture that looks like part of the early embryo cells, but from which no extra-embryonic tissue develops. scientists divided those cells into three groups treated with different chemical cocktails. This transformed them to transform into three cell types of embryo. One was treated with signaling agents to turn it into trophectoderm (one of the extra germ layers), another was turned into visceral endoderm (another extra germ tissue), and the third was left unchanged. After mixing in a lab those cells spontaneously formed a structure resembling a germ cylinder - this stage of development a mouse embryo usually reaches on the fourth day. 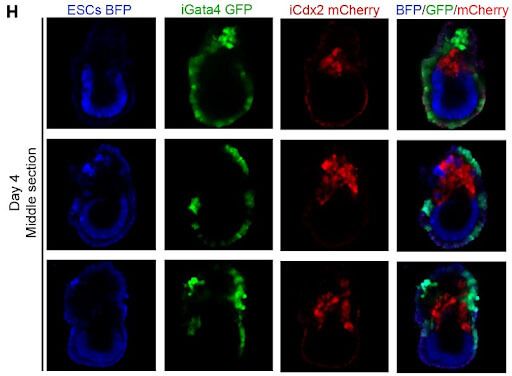 Unfortunately as embryos grew they started to need a more sophisticated environment. To ensure adequate concentration of nutrients and oxygen, scientists developed an “artificial womb” for them. It is important to note that his team didn’t try to recreate the uterus as a structure, only its function. The final design looked like vials in a rotating cylinder with a computer control environment, the same Hanna previously utilized for developing ordinary mouse embryos. The embryos continued to develop: they developed the necessary outlines, the longitudinal axis of symmetry, new germinal membranes grew (yolk sac and allantois), the precursors of the nervous system and intestines appeared, and the muscles in the developing heart began to contract.     But by the ninth day, they had an abnormality: the heart grew too much, and development stopped.

To ensure the wellbeing of developing tissues Hanna’s team used blood serum from umbilical cords. Another advancement was the use of pressurized oxygen. The mechanism resembles ECMO (Extracorporeal membrane oxygenation), a technology widely known for its role in treating COVID-19 patients. Thanks to ECMO patient’s blood is enriched with oxygen, in a special device and then infused back, which helps organs to function properly.

The researchers verified that the artificial embryos were similar to the real ones in terms of gene expression as well. They found characteristic markers of extra-uterine tissues, different layers of the future embryo and even germ cell precursors.

Figure 4: The precursors of different tissues in artificial (top) and normal (bottom) mouse embryos on day 8 of development. Red - precursors of the nervous system, blue - cell nuclei, green - precursors of mesoderm (middle layer of the body, from which the skeleton, vessels, muscles, and some organs are formed). Individual segments of mesoderm - somites (S) are visible. Tarazi et al. / Cell, 2022

The articles about those research made by Hanna's team attracted a wave of attention.

Leading researchers of the project, Amirav-Drory and Jacob Hanna, weren't sure how to utilize the method. They began contacting researchers and medical professionals in order to find out what ideas they would try to implement if synthetic embryos were available to them cheaply and in large numbers. And people’s eyes light up with interest. The reason was the wide spectrum of opportunities they imagined, from getting a better understanding of developmental diseases to bioprinting of tissues for transplantation.

This led to creation of a startup called “Renewal Bio” with big goals including increasing healthy lifespan, overcoming infertility, and genetic diseases leveraging the power of their new technology.

The startup has not yet disclosed detailed information about the planned experiments (except that Hanna himself will be the cell donor for the first sample). But it is already clear that there are still a lot of milestones to achieve before entering the market. One of the problems in the way of scientists will be the low efficiency of the procedure. At least in the case of mice, only two percent of the germ cylinders that were transplanted into the rotating culture survived to day eight without anomalies. That's 0.1 to 0.5 percent of all the cell aggregates that scientists collected at the start of the work.

To increase the lifetime and weight of artificial embryos, reduce the rate of abnormalities the technology company intends to develop new biosensors for biotracking, the better and cheaper incubators.

In addition, there may be difficulties in obtaining ethical approval for the experiments. In many countries, it is forbidden to grow human embryos longer than 14 days of development or to use parts of them for therapeutic purposes. But in order to create a "printer," embryos will have to be grown to a stage similar to 40-50 days of gestation. In Israel, however, the legislation is not as strict: only cloning is prohibited, the other restrictions are advisory in nature.

Let's wish the new promising start up good luck and watch them closely.